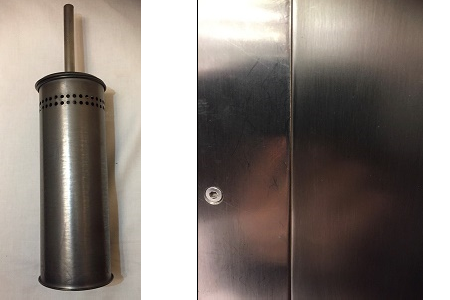 Scientists at the University of Birmingham say they have created an antimicrobial coating for steel surfaces which has proven in a trial to rapidly kill bacteria that cause some of the most common hospital-acquired infections.

Developed by University of Birmingham researchers, patented by University of Birmingham Enterprise, and to be commercialised by a new company, NitroPep, the coating – also called NitroPep – has been heralded as a new tool in the fight against the spread of infection. Working with the Royal Centre for Defence Medicine and the Royal Navy, the researchers conducted a trial which saw NitroPep coated on steel surfaces – including door handles, an operating theatre, and part of a communal toilet – on board a Royal Fleet Auxiliary ship.

Both the surfaces coated in NitroPep, and ‘control’ surfaces not treated, were subject to standard daily cleaning regimes while the ship was at sea for 11 months.

The surfaces were swabbed weekly, and the results analysed in the laboratory at the University of Birmingham showed the coating was effective against five different bacteria responsible for hospital-acquired infections – Staphylococcus aureus, Staphylococcus epidermidis, Enterococcus, Pseudomonas aeruginosa, and Escherichia coli.

The coating killed bacteria within 45 minutes; an achievement the scientists say is ‘far more rapid than currently commercially available technologies which have no significant effect on bacteria for around 24 hours’.

The trial results were published in Materials Science and Engineering C: Materials for Biological Applications, with the research undertaken by scientists at the University of Birmingham’s Institute of Microbiology and Infection and School of Chemistry, the Royal Centre for Defence Medicine, the University of Nottingham, and Queen Elizabeth Hospital Birmingham.

Dr Felicity de Cogan, Royal Academy of Engineering Enterprise Fellow at the University of Birmingham, and chief scientific officer at NitroPep, said: “Despite increased sterilisation and education campaigns, hospital-acquired infections have not been eradicated, and the accumulation of bacteria on frequently touched surfaces is key in the transmission of infection.

Graeme Forster, NitroPep’s MD, said: “NitroPep is a novel, cost-effective, and cutting-edge technology for bonding antimicrobial actives onto various surfaces which we believe is the future solution to a global problem.”

NitroPep reportedly allows for long-term application of an antimicrobial agent to metallic and plastic ‘high-touch’ surfaces that can reduce person-to-person transmission of infectious agents. Research is also being performed to apply the technology to ceramics, rubber, and silicone. The company is currently targeting items including door hardware and handrails in healthcare facilities and other public venues, aircraft seat back tray tables, cruise ships, key high-touch surfaces on hospitals beds and other medical equipment, air and water filtration systems, plumbing fixtures, public lavatories, and kitchens.