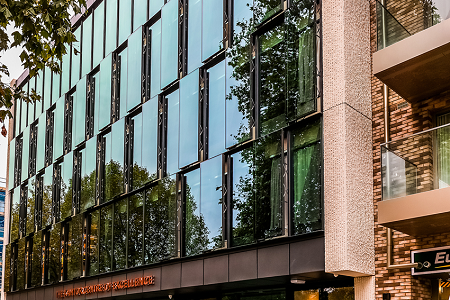 Parallel opening window vents from Kawneer were specified for a mental health project that the architectural glazing systems specialist says is ‘arguably without parallel’. Eighty-eight Kawneer AA100 SSG parallel opening vents were used as concealed windows, to maintain the same aesthetic as the façade, within AA100 mullion-drained curtain walling and AA720 doors on the new £40 million London headquarters of the Anna Freud National Centre for Children and Families.

The Kawneer systems were specified by architects, Penoyre & Prasad, as a ‘cost-effective’ solution, and enabled the practice to use the same systems for all areas of curtain walling and rooflights. Architect, Sam Frankland, said: “We wanted to create a very clean, paired-down façade that would give clear cohesion to the various buildings. Having scissor-action windows helped emphasise the planar quality when the windows are open.”

The project has seen the mental healthcare charity re-locate from its former residential properties in Hampstead to a purpose-built facility near King’s Cross, where it has brought together its global expertise in practice, research, and policy. The new headquarters combines a six-storey new-build, and the refurbishment of a century-old former chocolate factory and warehouse.

All the Kawneer glazing systems feature a diagonal frit on the glass, with the Kawneer curtain walling featuring on the ground to top floors, and the AA100 SSG parallel-opening vents on all but the ground floor. The AA720 doors feature on the main entrance and top floor, which also has a roof terrace.

Sam Frankland added: “Wanting to create spaces filled with light and views out over London, we opted for fully-glazed panels with a simple frit to give an element of privacy and a degree of visual interest to the façade.” The aluminium Kawneer systems were installed over eight months by a six-string team from approved specialist sub-contractor / dealer, JPJ Installations, for main contractor, Willmott Dixon.

The charity that today bears the name of Sigmund Freud’s sixth and youngest child was first established almost 70 years ago, and its approach – that every child and its family should be at the heart of the care they receive, working in partnership with professionals – has been reflected in Penoyre & Prasad’s design. This needed to be striking to reflect the charity’s aspirations and status as a world-renowned organisation that works with eminent academic institutions as University College London and Yale.

At the front, in the space made vacant by the excavation of a former courtyard, is the new six-storey building housing shared conference facilities and the Pears Family School, sponsored by the Anna Freud Centre. This caters for up to 48 youngsters who have been excluded from school or alternative education provision, and helps them return to mainstream education.

Penoyre & Prasad worked from the outset with the diagonal motif on the glazing on both the front and rear facades to inform both the transparent elevation and the pre-cast cheeks of the building, which they could do very little with, as they were both party walls, but which nevertheless replicate the diagonal fritting.

The five-storey chocolate factory, parts of which had been used as offices since the 1990s, was converted into a combination of head office facilities and therapy, post-graduate teaching, and research spaces, and break-out spaces. Although not listed, heritage officers at Islington Council had still been anxious about how the factory would be developed.

Sam Frankland said: “The client was very keen to have as environmentally friendly a building as possible, so aluminium seemed the natural choice for the curtain wall system which has been used extensively to the east and west facades and as a large rooflight.”

Based on the established Kawneer AA100 SSG POV system, the parallel opening design reportedly benefits from excellent ventilation characteristics, combined with thermal performance. Kawneer says increased air flow around the window’s full perimeter enables ‘highly efficient natural ventilation’ while greatly reducing draughts, as fresh air is drawn in the bottom of the window while warm, and stale air expelled via the top, creating full air circulation within a room.

A global look at engineering skills, capabilities, and weaknesses

This site uses cookies to analyse traffic, remember your preferences, and optimise your experience.
Learn moreClose